The Moiré Pattern Explained and How to Fix It

“Moiré is a French word meaning “having a wavy or ripply surface pattern”. It is pronounced in the US as “mwarre” or “muh + warre” and loosely rhymes with “the car”. Click here to hear the pronunciation for yourself.

What is the Moiré Pattern?

The moiré pattern or moiré effect as it applies to digital displays is a visual perception that occurs when an opaque pattern with transparent gaps is overlapped with a similar but different pattern or same pattern at a different size or angle. The visual result is a repeating set of unique patterns or colors. This effect is sometimes produced deliberately in photography to capture a special effect, but more commonly it can pose a big challenge by degrading the initial quality of the original image. To get the most out of your LED display, you will want to avoid the moire pattern at all costs. The video below shows a demonstration of the moire pattern and how it affects your photos and videos.

How does this impact photographing and videotaping LED display?

In the case of capturing an LED display, the moire effect occurs from the pixel structure of the LED board conflicting with the pixel structure of the photograph or video. Since the LED boards have a lower pixel density and larger pixel size than the resolution captured by your camera, the moire effect is almost certain to occur when photographing them.

This can pose a large challenge when trying to market an LED video screen. An LED board that looks crystal clear in person may look awful as an image due to the moire effect. From personal experience, this can be very frustrating – but luckily there are ways to combat this pesky phenomenon.

Ways to Get rid of the Moiré Effect

Combatting the moire effect can be tricky, and there is no sure-fire way to eliminate it. However, with some trial and error, there are several steps that can be performed to reduce it. Here are some ways to combat the moire pattern:

Change the camera angle: Changing the angle of the camera itself will adjust the way the 2 contrasting patterns overlap.

Change the camera focal length: Changing the focus of the camera will adjust the resolution of the photo, thus changing the overlay patterns.

Adjust the focus to a different area: Adjusting focus away from the patterns a little will reduce their visibility

Lower the shutter speed: lowering the camera’s shutter speed will help compensate for the low refresh rate of the LED screen, which will reduce the horizontal bar effect.

Edit the image post-production: Sometimes the moire effect is simply unavoidable. Or what if you have a great picture but the screen doesn’t look good? Luckily, powerful photo editing software such as Photoshop can do wonders in reducing this effect as well. Here’s a great article on how to fix it in post!

Another photo editing option – overlay the original digital image. If you are lucky enough to get your hands on the original image that was being displayed on the screen when you took the photo (i.e. a screenshot from the original video), you can overlay that image to line up with the affected image. Use the “free transform” tool in Photoshop (CMD+ T on a Mac or CTRL + T on Windows), hold CMD/CTRL, and line up the 4 corners. Then adjust the opacity of the overlaid image to allow some moire – this will make the photo look more natural because some moire is normal.

Looking for more information about optimizing your LED viewing experience? Follow the Insane Impact blog for the best resources about LED technology.

Insane Impact is a leading provider of LED video screens from coast to coast. We offer 3 core services: LED screen rental for events, mobile LED trailers for sale, and LED walls for installation. We were founded in 2015 with the mission to enhance experiences and gather community with first class service and high resolution, industry leading LED products. We also recently acquired Visible Display, a leader in the jumbotron rental industry that has been in business for over 20 years. Together, we strive to bring you the best experience on any LED display application you have, large or small. Click below to check out our services or send us a note! 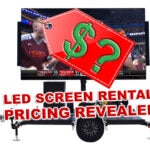