You are here: Home1 / 5 Ways to Throw an Unforgettable Tailgate Party

Football season is upon us! And as such, tailgaters from around the country are gathering to cheer on their favorite teams amongst friends, delicious food, cold drinks, opened hatchbacks and lowered truck tailgates. For those DIYers, venues, colleges and other organizations that are hosting a tailgate party, there are several things you can do to leave eventgoers impressed.

Ready to find out what they are? Read on to find out five ways you can host an unforgettable tailgate party.

1) Have Plenty of Hearty Food and Delicious Beverages

This is a no-brainer. Half the fun at a tailgate is indulging in hearty barbecues, snacks and local favorites, as well as a drink of choice. Make sure you have a grill or smoker going non-stop, as well as bartenders or beer tubs present. You wouldn’t want to make the “rookie mistake” of running out of the good stuff.

The glory of the game is of utmost importance to the dedicated football fan – but gathering with good friends and delicious football party food isn’t so bad, either. If you’re looking for some delicious football recipes, try some of the following. Below are the best tailgating food – these are delicious snacks are sure to impress your crowd:

3) You Can Never Have Enough Games

From bags (cornhole) to beer pong to bocce ball, you can never have enough games at a tailgate event. When was the last time you were at a tailgate and you weren’t watching or participating in a game? Get the games going to keep a healthy level of competition that all sports fans enjoy.

The playlist you choose will obviously depend on the type of audience you typically draw. However, you know that a few fight songs, “olé olé olé” chants and some Quad City DJs tracks will always get the crowd pumped up. Mix it up with a few classic game day songs and crowd favorites, alike. Of course, you may want to play the game audio while it’s on, you can always spin some tracks during commercials, breaks and timeouts to keep the crowd entertained.

5) Rent an Outdoor LED Display to Watch the Game

If you’re forcing your eventgoers to listen to the play-by-play on a radio, you’re doing it wrong. The AM-FM announcers may paint a picture with their words, but it’s just not the same as watching the game on a high-definition video display. There are plenty of outdoor LED units that are perfect for tailgating events. Don’t make your event attendees to listen to the big game through the car stereo, or crane their neck trying to see a small TV up in the corner of a random tent. Invest in a captivating screen that will make your viewers feel like they’re on the 50-yard line!

Do You Want to Throw an Awesome Tailgate Party?

Contact Insane Impact today! We’re the leading provider of outdoor screens in the country. With a full fleet of proprietary LED displays, we’re the team to call when you want to host an exceptional gameday event. Get in touch with one of our dedicated LED service representatives to see how we can help you draw a crowd and make an impact at your upcoming tailgate event.

Insane Impact is a leading provider of LED video screens from coast to coast. We offer 3 core services: LED screen rental for events, mobile LED trailers for sale, and LED walls for installation. We were founded in 2015 with the mission to enhance experiences and gather community with first class service and high resolution, industry leading LED products. We also recently acquired Visible Display, a leader in the jumbotron rental industry that has been in business for over 20 years. Together, we strive to bring you the best experience on any LED display application you have, large or small. Click below to check out our services or send us a note! 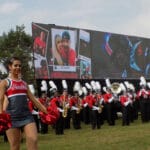